The place of Munoa, one of the historical spaces of Barakaldo, is already mentioned in 1569 as one of the properties of the nearby Monastery of Burceña and there had to exist until the middle of the nineteenth century a hamlet, apple groves, vineyards and orchards. All this land was acquired around 1860 by Juan Echevarria La Llana, mayor of Bilbao, deputy on several occasions and one of the largest owners of Barakaldo, who ordered the building of an elegant country house.

In 1916 the house passed into the hands of Rafael Echevarria Azcarate, grandson of Juan and husband of Amalia Echevarrieta, sister of the famous industrialist Horacio Echevarrieta. The couple decided to completely reform the palace, commissioning the work from the architect Ricardo de Bastida who retained the original block, adding a tower on each side and transforming the building into a superb Mansion style Second French Empire. In turn, they decided to build a garage, a house for a goal, a farmhouse and a large English-style garden.

This entire estate was kept on the property of the Echevarrieta family until 2014, the year in which it was acquired by the town hall of Barakaldo which, since then, has carried out several studies on it as well as various restorations, especially on the roof of the palace. 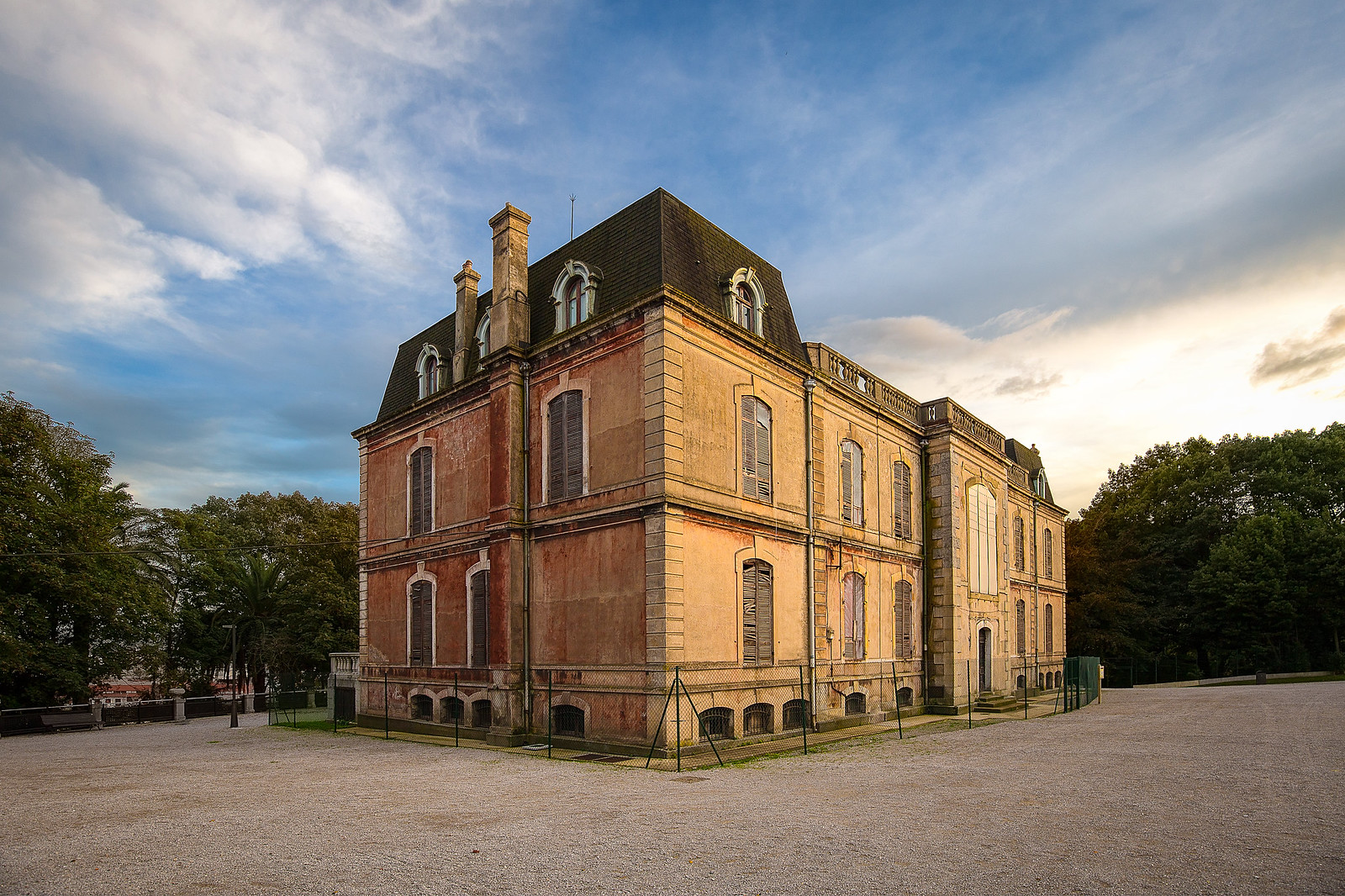 In 1916 the old estate and house of Munoa was owned by Rafael Echevarria Azcarate and Amalia Echevarrieta Maruri, who still resided in the echevarrieta family chalet on Gardoqui Street (Bilbao).

Rafael and Amalia composed a couple of refined tastes, lovers of art, travel and luxury that they decided, thanks to the economic resources provided by the company Echevarrieta and Larrinaga that was managed by Amalia’s brother, Horacio Echevarrieta, completely reform the house and turn it into an outstanding palace.

Over the years, the couple formed a wide collection of art in addition to becoming patrons of artists such as Paco Durrio or Valentín Dueñas who also received the help of Horacio Echevarrieta.

Years earlier, in 1911, due to the fragile health of Raphael and seeking a better climate, the couple had acquired the estate of La Concepción, in Malaga, designed in the middle of the nineteenth century by the marriage composed by Jorge Loring and Amalia Heredia. These created a beautiful English-style garden that was later expanded by the Echevarria-Echevarrieta following French tastes, who also renovated the palace and established various plantations.
Rafael and Amalia alternated for years their lives between the Munoa palace and the house of La Concepción, spending long seasons in the latter, until finally, in 1926, Rafael died. Amalia maintained ownership of both estates until his death in 1956.

Some invoices and deeds belonging to the former owners:: 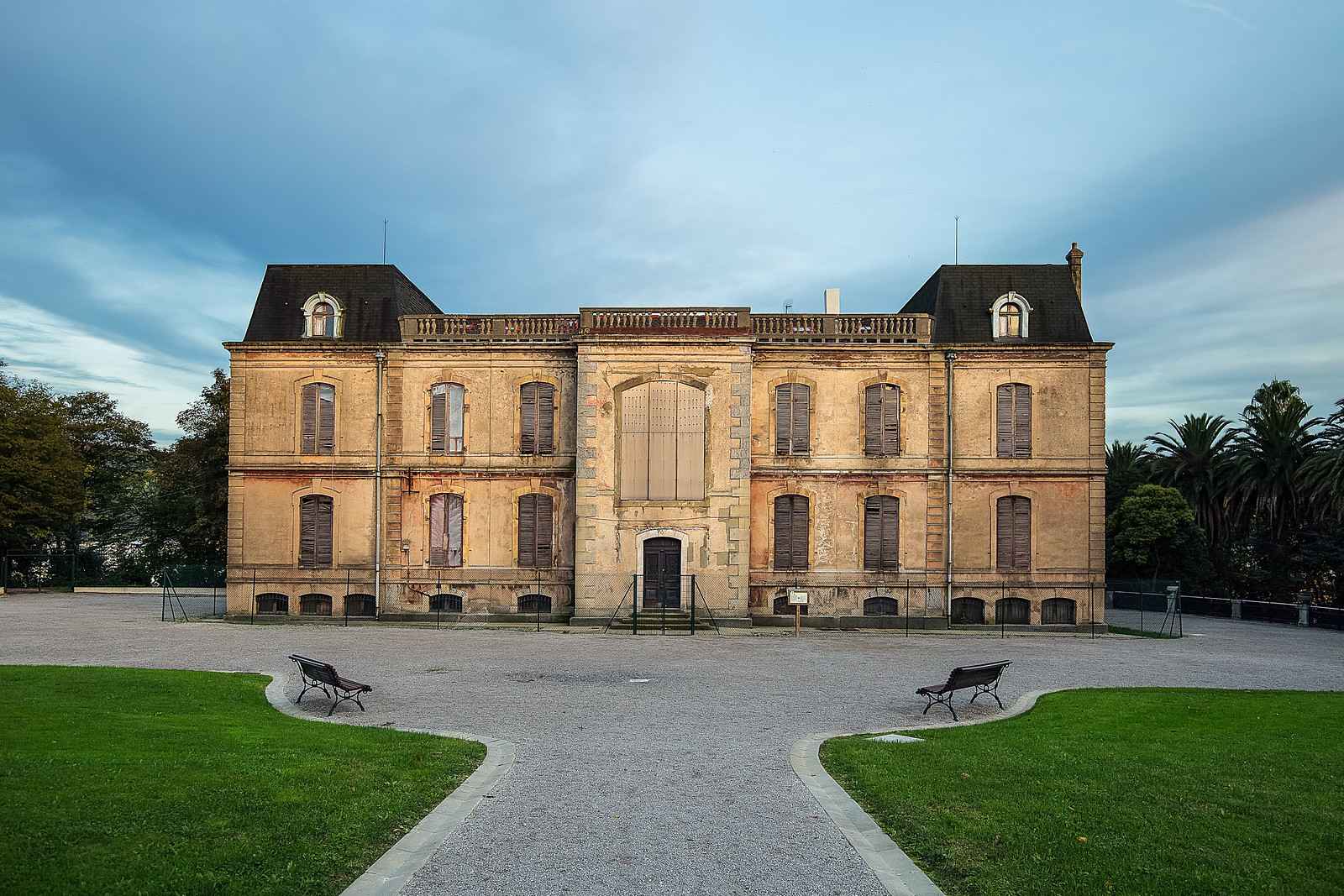 The other protagonist. Horacio Echevarrieta Maruri

Horacio Echevarrieta Maruri was the son of Cosme Echevarrieta Lascurain, leader of the Republican party and businessman with various properties and interests in the mining industry.

Horacio inherited his father’s property and political positions and, through the Echevarrieta-Larrinaga company, developed an economic emporium that made him one of the most important entrepreneurs of the first half of the twentieth century. He was an industrialist, banker, politician, patron, diplomat, newspaper founder…

His most important business performances were the Astilleros de Cádiz, the Saltos del Duero, the Iberia-Líneas Aéreas de España company, line 1 of the metropolitan of Barcelona, the Gran Via de Madrid, the House of the Press as well as several buildings of the Ensanche de Bilbao.
He maintained relations with royalty and was one of the architects of the 1923 negotiations in Alhucemas, Morocco, with the leader of the rifeños to free the 600 soldiers imprisoned after the 1921 Annual Disaster during the Rif Wars, which made him a famous figure.
Becoming a man of enormous fortune, he made several constructions, including the Punta Begoña Palace (Getxo). Its star, however, began to shut down in the 1940s due to the debts accumulated in its most ambitious project, the construction of a modern submarine model in the Cadiz Shipyards. Partly ruined he retired to live with his sister Amalia at the Munoa Palace where he died in 1963.

In 1916 the Echevarria-Echevarrieta couple commissioned the architect Ricardo de Bastida to reform the former inherited farmhouse, who decided to convert it into a Second French Empire style mansion. To do this he built three new elements: two side bodies, an imperial staircase with terrace and an elegant finish for the eaves.

Internally restructured the building on four floors. In the basement placed the kitchen, cellar, plate room, drying racks, coal trees and warehouses that gave way to an elegant gallery to access the garden; on the ground floor included a lobby that gave access to a large staircase, plus a large living room with organ, side halls, dining room, sewing room, office and chapel; the noble floor hosted the bedrooms of the family as well as various bathrooms; finally in the cabin included the various service rooms, lofts and wardrobes.

Bastida completely redecorated all the palace’s outbuildings using luxurious woods for the plasterwork, doors, plinths and floors, covering the top of the walls with accented fabrics, using plaster ornamentation for the ceilings, designing modern bathrooms and lavish fireplaces, as well as posing a chapel in neo-Romanesque style and a gallery covered with decorative tiles that gave way to the garden.

With this he created a spectacular palace that its owners were concerned with completing and improving with an outstanding collection of works of art over the years.

Inside of the palace (photographs by Unai Nuño):

Visit to the inside of the palace

The garage – like the missing goal – was designed by Bastida in the same Style Second French Empire as the palace. To do this he equipped with a burning roof topped with slate as well as large windows on the side facing the street.

The original interior design was altered during the execution of the work leaving a two-storey building, with the ground floor divided into two spaces, one for garage and one for workshop. To access the upper floor placed a simple central staircase that ended in a small hall that gave way to the driver’s house.

Find out more about the garage

To complete the set, the Echevarria-Echevarrieta decided to design a spectacular garden in English style built in two phases. In the first, made on the estate of the original house, a dense forest was raised with hardly any trails, while in the second, born thanks to an extension of 1918 made by Bastida himself, winding paths were introduced that alternated with groups of trees.

In total there are 652 trees and 100 shrubs of different species that we can appreciate today. The garden was completed with a sculpture by Nemesio Mogrobejo and a sculpture of Valentín Dueñas, as well as four benches decorated with scenes of Quixote, a large central pond and a stone balustrade topped with large vases.

The garden reduced its extension as a result of two expropriations in 1975 and 1988.

The qualification as a cultural property with the category of Monumental Complex, of the Munoa Palace, located in Barakaldo (Bizkaia), according to decree 41/2017 of February 7, published in the BOPV No. 29, Friday, February 10, 2017, includes the entire building unit and the garden of the palace, where the sculptures “Eva “by sculptor Nemesio Mogrobejo and “Dama” by sculptor Valentin Dueñas Zaballa are located.

These are two female nudes from life: 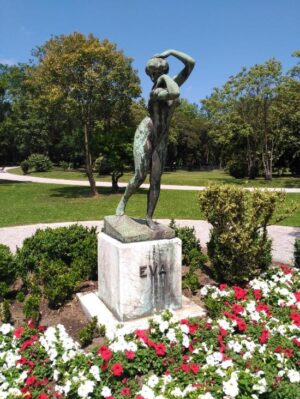 It is part of the sculptural trilogy created by the author. “Eva”, “Hero and Leandro” and “Riaveglio” and especially manifests the feminine ideal, a harmonious and delicate look at the female body.
The piece has its importance as it is one of the few that the artist himself managed to turn into bronze; a task that the Bilbao-born artist carried out in Barcelona, where he went in September 1908 to cast it together with other pieces.
Art scholars consider “Eva” as an important achievement, full of grace and elegant rhythms that dynamize the sculptural gaze from the most different points of view. 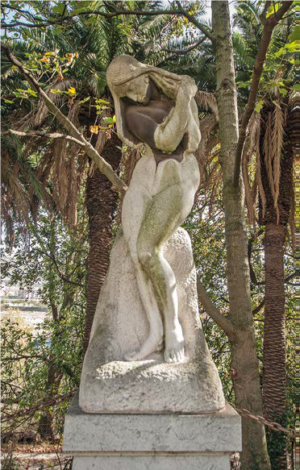 In the national exhibition of 1920 the sculptor presented this sculpture in plaster, which was later acquired in stone by the Echevarrieta family who installed it in the Munoa Palace. 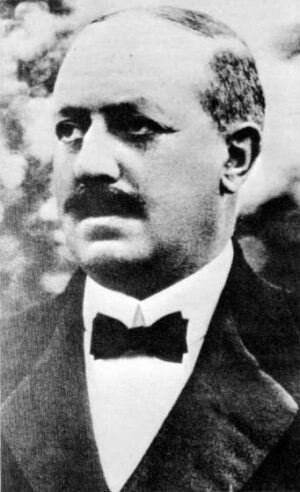 Moisés Huerta Ayuso (Valladolid, September 25, 1881 – Mérida, February 1, 1962) was a Spanish sculptor. A member of the Basque School, he worked in Bilbao and Vitoria. Professor at the Royal Academy of Fine Arts of San Fernando, in 1927 he made the Sacred Heart. His son Rafael is also a sculptor. 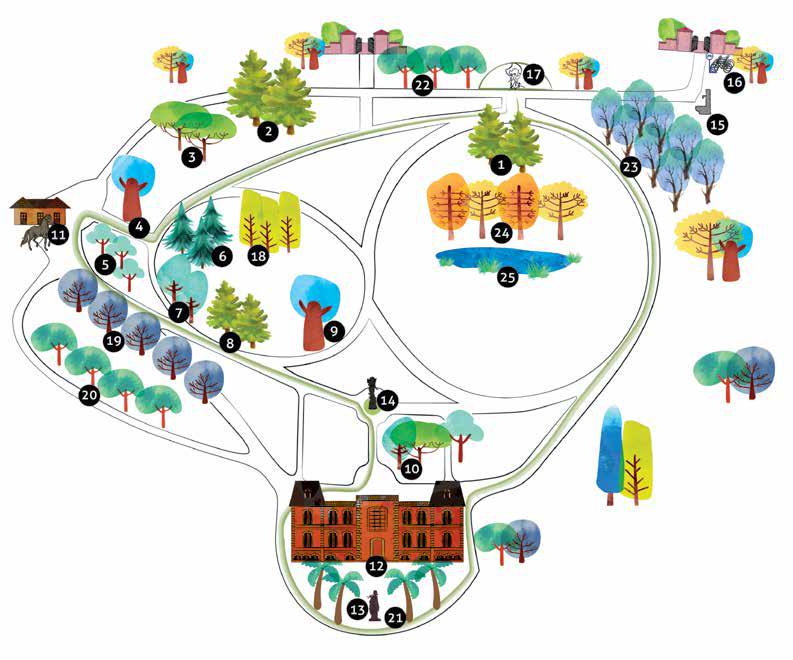 Cedar These are the longest-lived trees in the garden, more than 100 years old. This species originating in the Atlas with erect orange-colored pineapples, has needle-shaped leaves grouped into small starry rosettes.

Sequoia This is one of the largest trees in the world. Some can reach 95 meters in height and 10 meters in diameter on their trunk. In addition to their large size, these conifers are characterized by the thick bark of their trunk, quite fluffy or fluffy.

Jupiter Tree In front of the garage building, a small group of trees is striking: in winter for its smooth bark with spots of varied hue and in late summer and early autumn for its colorful pink flowers, with six large curly petals.

Magnolium These trees belong to one of the most primitive families that exist, the Magnoliaceae. Its large flowers give off a pleasant aroma that has been used as a perfume throughout history. Several specimens of these evergreen trees are located at the northern end of the palace.

Organized groups can request a visit to the Finca Munoa in botanical key, to know the different plants and elements that make up the garden of the farm. It is not possible to visit the palace. These types of visits are on weekdays from 10:00 to 13:30h and are subject to availability.

Some weekends, on time, are made free visits for the
public. This visit covers various topics related to the botanical of the garden, English style. To learn more, check Natur Gela’s monthly agenda (Blog section). 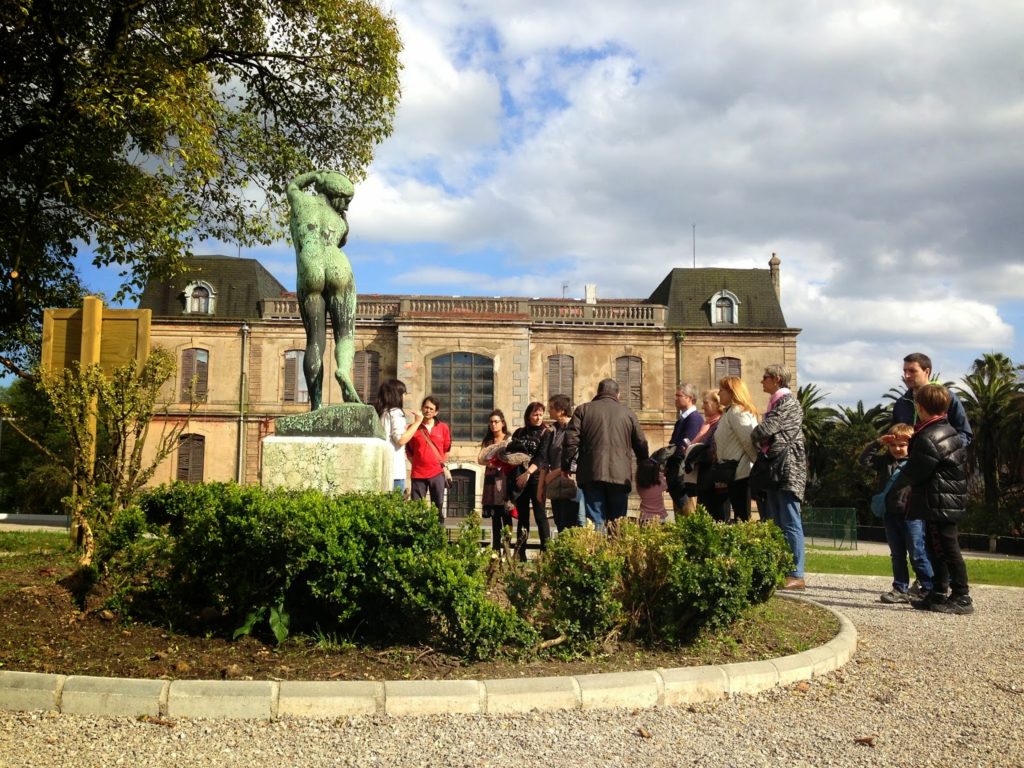